First Sunday of Lent – Cycle B 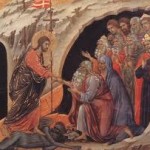 Here’s a question:  When exactly did the gates of heaven open? Was it at the moment of the crucifixion (see Mt. 27: 52-53)? And where exactly did the spirit of Jesus go when his body lay in the “abode of death?”

The second reading today (I Peter 3: 18-22) suggests a tantalizing answer: In (the Spirit) he also went to preach to the spirits in prison, who had once been disobedient while God patiently waited in the days of Noah…

This enigmatic sentence became a scriptural basis for the section in the Apostles’ Creed that states “He descended into hell”.

We used to say that every Sunday, but what does it mean?  I love this portion of an ancient poem by an unknown Christian, speaking about this mystery:

The earth trembled and is still because God has fallen asleep in the flesh and has raised up all who have slept ever since the world began. God has died in the flesh and hell trembles with fear.  He has gone to search for our first parents, gone to free from sorrow the captives Adam and Eve.  He took them by the hand and raised them up, saying: “Awake, O sleeper, and rise from the dead, and Christ will give you light”.

How does time and space work with God?  Had “all who had ever slept since the world began” waited out those thousands of years in “real time”?  Or is there perhaps a “wrinkle in time”, a mere blink that separates this life (and death) from eternity?

Be at peace.  The God of heaven and earth (and under the earth) has gone in search of us.

Is it hard to imagine that hell might be empty?

With thanks to my dear friend Susan Maly, who lent me A Wrinkle in Time and set me on a whole new path of understanding all the things we’ll never understand.