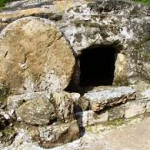 Come with me for a moment.  I want to show you something.  Stand here with me in the courtyard of Caiaphas, the high priest.  The temple guards have just arrested Jesus.  Did you hear all that commotion when they marched him up from the Mount of Olives?  Now they’ve got him in the house.  See that man over there, the one with the thick accent?  He was one of the followers of Jesus.  But he keeps denying it.  Let’s ask him for a third time: Surely you were with him, for you too are a Galilean, right?  No, he says, I don’t know what you’re talking about.

Can you hear it?  The rooster crowing?  And now look!  There is Jesus, looking out the window, staring at his friend. What is that message that passes between them?  Jesus has pure love in his eyes.  But his friend’s eyes are starting to turn red, and he runs far away from the fire, far away from Jesus, weeping so loudly we can still hear him.

Listen.  The sound of his crying melts into the sounds of Jesus’ prayers―is that Psalm 88?― as he stands chained in the dungeon in the caves just beneath us.

Two thousand years later, millions of believers still come to this place.  Roosters still crow in the courtyard.  Pilgrims still climb down, down into the pit where Jesus was chained the night before he died.  And the sound of Peter’s weeping meets our own.

Why does the Church remember Peter as her first leader after his terrible betrayal?

No way out.  That’s what she must be thinking.  The woman standing in the middle of the Temple area must be sure that there is no way out for her.  The Pharisees have her penned in, a human sacrifice to their need to catch Jesus violating the Law.

Jesus, who knows the meaning of the words mercy, not sacrifice, is her way out.  He seems utterly uninterested in the details.  He simply issues this challenge: okay, you who have never sinned may now step up and throw the first stone. They all walk away, of course, and when he looks up he seems surprised to see her still standing there.  He couldn’t be less interested in condemning her.

His soul calls out to her soul, and the way out is clear.  Mercy.

Another  way out, of course, occurred  twelve hundred years before, when God divided the Sea and the children of Abraham marched through it dry-shod, with the water like a wall on their right and on their left.  If they stayed on land they’d be killed by Pharaoh.  If they went into the water they would drown. So God created a new way, a third way, by opening a way in the sea for them to “pass over”.

Do you think that there is no way out for you, no forgiveness, no chance to move on from your bad behaviors, bad choices, and bad priorities that now have you trapped?  Here’s God’s special love letter to you today:  Remember not the former things.  Don’t ponder the things of the past.  Behold, I’m doing something new.  Watch.

And we will all watch and pray with you.

How have you given someone a way out?

One of the things I enjoy about this forum is that I get to talk about books.  It’s also unfair, because I get to share what I’m reading while the reader doesn’t.  But this website  is open for readers from around the country to jump on and talk with each other about spiritual (or other) books they are reading.  Thanks so much for joining the online conversation!

Right now the book that captures me is Tattoos on the Heart by Gregory Boyle, S.J.  It’s his memoir of the ministry that the Jesuits set up in South Central L.A. for the ten thousand gang members within the boundaries of the parish where he serves.

At the center of each of the stories is one theme: forgiveness is the only thing that can heal us, ever.  Fr. Boyle has presided over hundreds of funerals of children he loved who were killed by children he loved.  (And then those children were killed by the “families” of the murdered, and the miserable vortex of violence just spiraled higher and wider.)

The Paschal (Easter) Mystery, which is the center of our faith, says this: Your dad beat you? You will never, never beat your own children.  Your brother was killed by a gang member?  You will not avenge his death, but will pray for his murderers.  Your son has shamed you and squandered his inheritance on dissolute living?  You will wait for him at the city gate and run to greet him when he, half-starved and humiliated, returns.

That iconic story of forgiveness is the one we all need to tattoo on our hearts.  Or maybe you have your own story, your own memory of being let off the hook that resonates even more deeply for you.  We’d love to hear it.  We’re listening.

Have you experienced a reconciliation this year?

It’s the third Sunday of Lent, and forgiveness is afoot.  The next three weeks  give us those great stories of radical love that are the hallmark of the Lenten season in Cycle C−−−the gracious second chance given  to the Barren Fig Tree, the Prodigal Son, and the Woman Caught in Adultery.  The first two stories are parables from Luke’s gospel, and the third is an event recorded in John’s gospel that scholars suspect was originally told by Luke.  Its wonderful compassion for a woman trapped in a sinful culture is so much like St. Luke that it fits perfectly in Cycle C.

I really resonate with today’s unproductive fig tree.  There are many areas of my life that continue to exhaust everyone around me, while bearing no fruit whatsoever.  (Let’s not fuss with the details, okay?)  But year after year I resolve to eat less, be less sloppy, be on time, depend on the kindness of others less and on my own discipline more.  (Okay, those are the details.)

I can hear that unfruitful fig tree crying out, in the secret language of trees, “Stop!  Please!  I’ll work harder.  I’ll take less and give more.  Please give me a second chance.  I don’t want to die.”  And we breathe a huge sigh of relief with the tree when the Gardener−−−yes, the very One who tended the original Garden−−−promises to sacrifice his own efforts in order to save the life of the tree.  A second (millionth) chance is given.

But watch! The crocus pulls up. The trumpet sounds.  It’s the third Sunday of Lent, and because forgiveness has outmatched justice, Easter is afoot.

What radical love have you experienced this Lent?