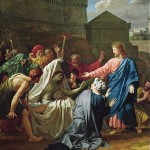 I read a good book last month.  Three Weeks with my Brother is a thoughtful and mesmerizing memoir written by Nicholas Sparks. His life story is far more harrowing than I imagined the author of The Notebook had lived.

At ages 37 and 38, Nicholas and his brother Micah took a trip around the world. Their conversation often turned to memories of their childhood.

Growing up in poverty with a sister and two wildly dysfunctional parents, Nicholas and Micah remained faithful Catholics into their early adult years, but the many tragedies that they endured led them to two different conclusions about God’s ability (or willingness) to answer prayer.  Listening to today’s readings, we could ask the same questions.

Why did God allow the widow of Zarepheth’ s only son to die, and then be resuscitated by Elijah? There must have been many grieving families in Israel, but the only son of the widow of Nain Jesus raised up and gave back to his mother.

I think that God wants us to engage in the mystery.  The creator of wonders beyond our galaxy desires that we pray to be healed, that we pray for others to be healed.  Some will be given more years of life, and others will go to God earlier than we so earnestly desire.  Michelangelo’s Pieta images Jesus himself, the only son of his widowed mother, in his mother’s arms after his crucifixion.  God did not save him from the cross.

But the empty tomb stands as an eternal witness that God has complete power over death.  We live as servants to the God who desires that we draw ever more near.

How do you “engage” with God?