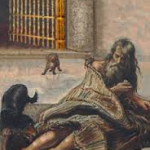 We’re twenty-six weeks into Ordinary Time, and already I’m thinking about snow.  With the cool weather comes all the delicious smells and tastes and sights and sounds of fall.  It’s finally time for pumpkin bread and football games.  And that means that this liturgical year is beginning to wind down.

But before we start looking for the Advent candles, let’s reflect for a moment on the gospel―St. Luke’s gorgeous proclamation of good news for the poor ―that we’ve been hearing all year and will continue to hear for the next eight weeks.  Today’s story about the rich man (Dives) and the poor beggar Lazarus is a perfect example of Luke’s “business plan”.  His mission is that anyone who reads his gospel shall never again store up treasure for themselves while forgetting about those who have less.  He wants us all to be rich in what matters to God.  Eternity depends on it.

We’ve heard the great Lukan stories since last December.  The poor, unmarried virgin says be it done unto me according to your will, and the world is changed forever. Early in his public ministry Jesus’ very first words to a great crowd assembled on a plain are blessed are you who are poor, for the kingdom of God is yours.

The guy who builds bigger barns to store all his goods has his life demanded of him that very night.  The guest list for your big party should begin down at the homeless shelter and the school for the blind.  And Jesus, for whom there is no room at the inn for his birth, in death is buried in a tomb not his own.

Is there a Lazarus in your life? 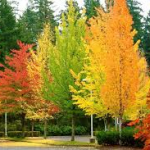 What a strange story.  The steward who cheats his employer makes friends by inviting other people to cheat him too, and then the employer praises him for being so crafty.  I want a boss like that.

Actually, I do have a boss like that.  Jesus Christ is the boss of me. He encourages me today to be endlessly cunning, wily, inventive, ingenious, and endlessly passionate about spending eternity with him.  Do whatever it takes to find me and draw near to me, and I will draw near to you.  Don’t die without my grace and love and presence.  Heaven will be a lot easier to enjoy if you start pursuing it right now.

So, how do we use all of our cunning to enter the kingdom of God?  Perhaps the first step is to notice those things that make us feel unsettled, unhappy, unloved, and undone.  None of that is kingdom material, so we have to find ways to detach from resentments, rage, the pain of disappointments, and the day-to-day coarsening of our hearts through exposure to parts of our present culture.

If we pay attention to what makes us truly happy that will surely bring us near to God, the creator of all joy.  Yesterday I found a lovely CD in my car that had been forgotten in the glove compartment for several years.  The minute I put it in the player the car was filled with beauty, and the grace that always accompanies it.  Note to self: listening to beautiful, prayerful music makes me happy.  That must be a God Thing.  Do that some more.

I think I’m getting the hang of this.

What ingenious ways can you find to bring more “God Things” into your life? 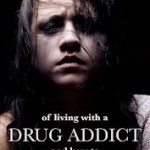 He came home, finally.  Yes, I saw him staggering towards the gate.  Even though I’ve spent all these months staring at the road, willing for him to appear in the distance,  I was too shocked to recognize him.  He’s lost so much weight he barely resembles the boy I love, the one I fed and cared for, the one I taught to ride a bike and jump off the high dive.  His mother didn’t drink coffee for nine months while she was pregnant with him so that he could have the best start in life.

We’d been searching for him, of course.  After he walked away from the rehab center we knew he’d go right back to the streets.    He found his dealer and went straight back to using.  He even admitted that he was the one who broke the window in the basement and stole the computer last winter.  The truth is, we were secretly relieved.  He remembered where he lived.

The kids are torn.  They were crying and hugging him and telling him how much they missed him.  But I know they’re really scared now.  It’s been a year of anxiety for all of us, wondering if he was dead in some crack house.  Now we all have to live with the tension of having him back.  He’s back in treatment and he really does seem like he’s beat it this time.

His older brother held back from hugging him.  There’s been a lot of betrayal there.  It’s going to take a lot of work to repair the damage.

Can you make the welcome home party on Saturday?

How do you reconcile today’s gospel with what we know about addiction?

How are you at the art of gentle persuasion?  Do you need some help getting a child to eat her broccoli, or an elderly parent to give up his car keys?  Read Paul’s letter to Philemon, found towards the end of the New Testament.  In just 445 words, Paul gives a tutorial on how to gently but firmly get someone to do the right thing.

Philemon owned the home where the earliest Christians of Colossus (in modern-day Turkey) gathered.  He was certainly a faithful follower of Jesus, and yet he appears to have owned a slave, a young man named Onesimus. As far back as St. John Chrysostom (347-407), this letter has been used to either justify or vilify slavery because Paul is coaxing a slave-owner into taking back his slave as a free man.

Onesimus has left Philemon’s household and has become a companion to Paul during his imprisonment, probably in Ephesus in the mid-‘50s.  Onesimus has become a devout Christian, so beloved of Paul that he calls him “my own heart”.  Paul has a deep love for both slave-owner and slave because they have both been “co-workers” with him in proclaiming the gospel.

Paul’s authority over those early churches stands in the background of this warm letter.  He could command Philemon to take Onesimus back and not exact the accepted punishment for runaway slaves (cutting off a leg).  But he wants the authority of Christ to override his own.  He is persuading Philemon to do that hardest of all things: to allow Christ to change his behavior, even when his culture encourages him to do the opposite.

That’s the great challenge for us today.

Are you currently working on coaxing someone to change a behavior? 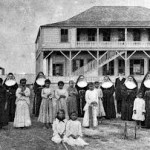