Solemnity of Our Lord Jesus Christ, King of the Universe – Cycle C 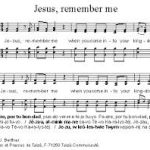 Jesus, remember us when you come into your kingdom. Remember us, Jesus, in the Philippines.  You thirsted on the cross that terrible day.  We thirst.  We have no clean water, and no one can reach us in our isolated village.  We suffer with you, Jesus.

They looted your belongings and cast lots for your garment that terrible day. Here, every source of water and food and shelter has been looted.  We are not criminals.  We are trying to save our children.  We are naked, and wet, and cold, and hot.  We suffer with you, Jesus.

Remember those, Jesus, here at home, who await court trials. Their family members are terrified for them.  Console all prisoners around the world who are wrongly imprisoned through the false testimony of others.  You suffered that betrayal too.   And as you forgave the Good Thief from the cross, let all prisoners who have sinned against you deeply know the deep consolation of your saving mercy.

Your friends fled from you that terrible day.  What a comfort it would have been to have them there at the cross, praying with you.   Instead, your tormentors mocked you.  Our elderly understand that, Jesus.  They are alone in their nursing homes, forgotten by friends, abandoned by their children.  Their memories fail them, and they are the source of snickering behind their backs.  They suffer with you, Jesus.

In what areas of your life do you ask Jesus to “remember” you? 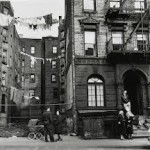 If you go to New York City sometime, try to get to the Lower East Side Tenement Museum.  The inhabitants of Little Italy, Chinatown, the Jewish communities, and thousands of others lived in the tenements high above the bustling saloons, clothing and jewelry stores on Orchard Street― a block that historians say was the most densely populated street in the world in the 1870s.

Listen to the babies crying.  Hear the music of the world’s languages as neighbors barter for the freshest tomatoes, or the best price for winter coats.  Get ready to sweat as you help Gerta Schneider cook schnitzel in her tiny kitchen in July.  Watch Mama Rogarshevsky light the Sabbath candles, and bow your head as Papa prays the Sabbath blessing.

They left large farms to live literally on top of one another in a crowded city.  Many escaped earthquakes, famines and plagues, or ominous pogroms that bode of the holocaust to come.  They came for a better life, and later generations found it.

Today, neighborhood carnicerias thrive next to Middle East grocery stores and Somali markets. These groups fled their homes also, where unstable nations rise against nations, and kingdoms against kingdoms.

We, too, live in a time of powerful earthquakes, famines and plagues. Hurricane Sandy came close to destroying in a day the very tenement neighborhood that housed millions of immigrants for three hundred years.

We Coloradans have our own flood narratives, too.  And Nebraskans have tornados.  And don’t even mention fires to Californians.  Is the world finally coming to an end?

Do not be terrified, says Jesus.  If we all work to heal our planet the God of all nations will secure our lives.

In what ways do you live by faith, not fear? 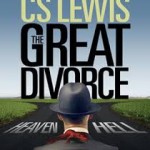 What awaits us after death?  Will heaven be so radically different from earth that even the greatest joys of our existence here will fade to nothing once we are in the presence of the Beatific Vision?  That image of heaven makes me uneasy.

We cling to this life because it’s all we know.  Of course we hold close to the loves and friendships that make our lives so rich and full.  Why on earth would we willingly leave them for an eternity of the unknown?  The ancient author of the book of Ecclesiastes reflects on this in my favorite passage in all of scripture:  God has made everything beautiful in its time, and yet has set eternity in our hearts (3:11).

Yes.  We embrace and love this life, and yet we carry a deep intuition that this is not the end, that we are made for eternity, where every tear shall be undone, and death will be no more (Revelation 21:4).

I somehow sense that heaven will be more and more of all the things we built on earth.  As C.S. Lewis suggests in The Great Divorce, if we demand to cling to our resentments and pettiness and selfishness, heaven can’t give us more than what we consistently chose throughout our lives. We will flee from heaven because it’s too solid, too real, and too wonderful for us.

But, as the great John Kavanaugh, S.J. wrote:  Those who cast themselves into the arms of the living God, no matter what their shame or sorrow, will find what their hearts desired.

I choose to cast myself into those arms, and to trust in the God of the living.

I think that we are all doing the best we can.  It’s tough out there.  We have to be great parents, attentive and available grandparents, debt-free, environmentally conscious, active parishioners, and avidly working on our fat-to-muscle ratio.

Outsiders might look at our rowdy kids and say, “Why doesn’t someone teach those parents how to discipline their kids?”  Others might say, in the car after the party, “I can’t believe they used paper plates when they could have just brought out their regular dishes and washed them later.  I thought they were supposed to be such environmentalists.”  Or, the worst, “She says she’s watching her cholesterol, but did you see that piece of cake she ate?”

That’s what Zaccheus experienced when Jesus, who had talked so often about the dignity and worth of the poor, called this rich man down from the sycamore tree and invited himself over for dinner.  The Incarnate One knew he was doing the best he could, and Zaccheus, overjoyed at being held in the embrace of Love, did even better than his best for the rest of his life.

Whose belief in you has inspired you to be the best you can be?