Home » Advent - Cycle A » Fourth Sunday of Advent – Cycle A

Fourth Sunday of Advent – Cycle A

Do you know this old joke?

Johnny:  Mom, I get to play St. Joseph in the Christmas program!

Mom:    Go back and tell Sister you want a speaking part. 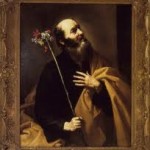 It’s true.  Joseph doesn’t utter a single word in any of the Gospels, and if it weren’t for Matthew, with his unique memory of St. Joseph’s saving role in the protection of Mary throughout her pregnancy―and  of the Mother and Child after the birth, with the dangerous flight into Egypt and eventual return― we wouldn’t know much about St. Joseph at all.

As early as the second century, writers began adding their own imaginative additions to the scant information given in the Gospels about both Mary and Joseph.

In those books we learn that Joseph was a widower with several children; hence the several occurrences of the New Testament phrase “the brothers and sisters of the Lord”.  (That’s one reason he is often drawn as an old man in Nativity scenes.)  In these stories, Mary lived in the Temple.  When she was fourteen all the unmarried men from the royal lineage of David were summoned so that her spouse could be chosen.   Calling on the prophecy from Isaiah that we heard last week―a branch shall come forth from the family of Jesse, a blossom shall bud from that tree―they all brought branches and extended them.  And sure enough!  The Holy Spirit descended on Joseph’s branch.

That’s why St. Joseph is often depicted in art as holding a branch with a blossom on the top.

Never mind that St. Jerome later said “phooey” to the stories by simply translating “brothers” as “cousins” and ending the need to create stories to line up with theology.  There’s something charming about it anyway.

This column was written in my head while having a fascinating conversation with my friend and greatest teacher, Sr. Macrina Scott, OSF, who once again opened me up to the wideness and depth of our Catholic traditions, some of which made it into Scripture!

12 Comments to “Fourth Sunday of Advent – Cycle A”