First Sunday of Lent – Cycle A

What a sneaky snake that serpent was.  He made his appearance in the Garden (who let him in to begin with?) and right away started lying.  That’s the thing about enemies. They take a lie and find a way to re-word it so it sounds like the truth.  Maybe they know we prefer the lie to begin with. 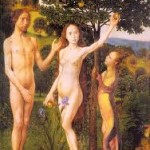 When the snake first encountered Eve he framed his question/lie masterfully:  What?  God told you you couldn’t eat from any of the trees in the Garden?  But Eve corrected the Enemy:  No, we can eat from all the trees except the one in the middle. If we eat from that we will die.

Now here is something you’ll never hear from a liar:  You caught me.  I was trying to stir up some drama, but you knew the truth and you knew that I wasn’t relating it correctly and you nailed me.  Sorry.  I’ll sliver away under my rock and never bother you again.

But no.  The serpent turned up the heat by telling a greater lie, which fell on Eve’s receptive ears:  You poor thing!  You certainly won’t die! Don’t you realize that if you eat from this tree you’ll be as wise as gods?  You are the victim here and I am just outraged for you.

A million years later the Tempter tried the same lies on Jesus.  But the new Adam rejected Satan, and all his works, and all his empty promises.  And at the end of these forty days we will gather at the Easter Font, renew our baptismal promises, and reject the Liar once again.

What lies do you resolve to reject this Lent?

7 Comments to “First Sunday of Lent – Cycle A”