Let me add my astonished voice to the millions of voices who must have said today, after hearing today’s Gospel, “Of all the days in history for these readings to come around!  God is clearly in our midst.” 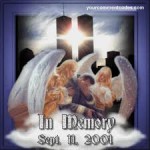 Think about it.  Forty-two years of Sunday Masses have gone by since the new lectionary was received by the Church on the First Sunday of Advent, 1969.  That’s 2,184 Sundays.  Jesus’ great parable about the necessity of forgiveness has only appeared on fourteen of those Sundays, and one of those is today, on the tenth anniversary of the event which challenged our willingness to even speak of forgiveness, much less try to activate it.

September 11, 2001 is the date that will live in infamy for most Americans because more of us living today were of age on that date than were of age on December 7, 1941, and the generation who lived through that awful day in 1941 was equally shocked when those towers came down.

On this tenth anniversary of the temporary triumph of hate, let the memories come.  Let the shock set in again, and the sadness.  And then turns your eyes upon Jesus, and who speaks so intimately to the world today through Matthew’s Gospel account, and whose kindness is new every morning.

And hear old Sirach, reaching out to us in time today: Wrath and anger are hateful things, yet the sinner hugs them tight…The vengeful will suffer the LORD’s vengeance, for he remembers their sins in detail.

Who will speak the wisdom of Jesus, the Reconciler, in our age?  If not us, who?  If not now, when?  Let’s let our voices ring.  Let’s seek the way of peace together.  Let’s roll.

How has the event of September 11, 2001 impacted your relationship with God?

5 Comments to “Twenty-fourth Sunday in Ordinary Time – Cycle A”