Third Sunday of Lent – Cycle B 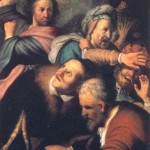 Life can only be understood backwards, but it must be lived forwards.

Ain’t that the truth?  How many times have we understood our lives only after the passing of years?  If only we had had the wisdom and poise we now possess way back when we really needed it, like at that high school dance, or when we were raising our kids, or caring for failing parents.

Today’s Gospel is a good example of this vexing reality.  When Jesus is asked on what authority he takes a whip to the moneychangers and the animals in the Temple, he says Destroy this Temple and in three days I will raise it up.

No one understands.  What could Jesus possibly mean?  Everyone knew the Temple had been under reconstruction for 46 years already (and in fact was not completed until 62 AD, only to be destroyed by the Romans eight years later.)  So what could Jesus mean?

Ah.  Perhaps the light dawned as Peter and the Beloved Disciple and Mary Magdalene stood in the empty tomb that Easter morning and counted backwards.  Three days in the tomb.  In three days I shall raise the Temple up. Ah.  Jesus was the new Temple.  And he had to die in order to raise it up.

The Gospel says that after the resurrection Jesus’ disciples remembered that he had said this, and they came to believe the Scripture and the word Jesus had spoken.

Even the disciples had to “understand backwards”.  That which was hidden in life became astonishingly clear through death. And after that, no threat of martyrdom could keep them from carrying the Gospel to the ends of the earth.

What event in your life can you now understand more clearly than when it happened?

One Comments to “Third Sunday of Lent – Cycle B”