Solemnity of Christ the King – Cycle B 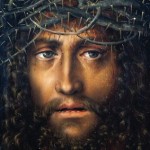 When Jesus tells Pilate, “My kingdom is not of this world” I always squirm a little.  Why isn’t it?  Why isn’t the incarnation—God made flesh and dwelling among us—the kingdom of God?  I squirm because I really, really like this world, and there are many moments every day where I think, “Yes, this is the kingdom, right here.”

Now that we have come to the end of the Year of Mark we can look back and find all kinds of ways in which Jesus created the kingdom while he lived.  Remember those four friends who carried their paralyzed friend across town, then took the roof off and lowered him down so that Jesus could heal him?  That’s the kingdom, right there.

Or remember when Jairus compelled Jesus to go off in a new direction in order to heal his daughter, and in so doing Jesus walked right into the path of the hemorrhaging woman, who reached out and grabbed the hem of the Kingdom as he passed?  A young girl and an aging woman, both brought back to health because they met the Kingdom of God.

There was Peter’s wife’s mother who, overjoyed at being made well, immediately resumed her life of service to the Kingdom.   These are just a few of the stories Mark told us this year, but they all end the same: the encounter with Jesus is the encounter with the Kingdom, and yet the fullness of that kingdom is still to come.  Let’s let Handel, and Revelation 11:15, end the year for us:

What glimpses of the Kingdom do you have in your life?

9 Comments to “Solemnity of Christ the King – Cycle B”