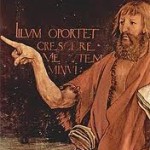 The Preaching of St. John the Baptist by Pieter Bruegel the Elder

Recently, a friend gave me a birthday card that told some of the significant events that were occurring around the time of my birth.  I now know the President of the U.S.A., most popular song, and Best Movie the year I was born.  I am a product of the times in which I have lived. I like looking at my life from the lens of history.

St. Luke likes this too, and we begin our year-long reading of his gospel by being placed right into the historical setting of Israel, circa 27A.D.  We now know, thanks to him, that at the time of John’s ministry in the wilderness (which for Luke closes the time of waiting which the Old Testament prophets endured) there were some very dark, malevolent people on thrones in Judea and Galilee.  Not only are the Roman emperor, and Judean governor, and tetrarchs of the Galilee and Judea named, but the high priests in Jerusalem are also noted.  Each of these officials will play a much larger part in the history of the world than even Caesar imagined, for they participated in the unfolding of salvation history, which is eternal.

In the midst of all this pomp and treachery we hear a voice from far in the desert, crying out, “Prepare a way for the Lord!” He is a ragged man, this John.  He knows something; he senses that the One is drawing near.  As the rest of the Roman Empire busily raises up valleys and clears roadways for the coming of some officious bureaucrat, John demands that we raise the valleys of our lost hopes, and chisel down the mountains of our hardened hearts.  The King is coming.

No Comments to “Second Sunday of Advent – Cycle C”