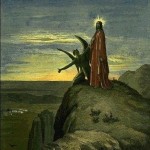 I always get a little chill when I think about that single instant in which Satan showed Jesus all the kingdoms of the world.  It’s fascinating to consider what the evangelist thought Jesus saw.  Luke knew about ancient Egypt and Greece, but he had no idea that there were civilizations unknown to him (but not to Satan, apparently) far to the east that had been flourishing for over two millennia.

I don’t imagine that Jesus, who was present at the creation of the world, was  surprised when Satan showed him North China, or the Indus Valley, or Africa, or even the kingdoms of the Americas, the existence of which would not even be known by people in the Middle East for another 1400 years.  Those histories, which are still unfolding through the work of archaeologists and nature’s own ingenious way of revealing the past, were certainly in the mind of God before the beginning of time.  The spooky part is that they are in Satan’s mind too.

And what did Jesus see, in that instant, of the kingdoms to come?  The fall of the Roman Empire, the vast reach of Islam, the “New World” and its diverse indigenous peoples, the bloody revolutions, the abundant harvests, the great cities and the thousands of agrarian communities were revealed in an instant.  He saw the “little man” of Assisi.  He also saw Auschwitz.

Three years later, after Satan had returned to enter Judas and to sift Peter like wheat (Luke 22), Jesus saw it all again, this time from the hill of Calvary.  And all creation, from the beginning until the end, whispered with the Good Thief, “Jesus, remember me when you come into your kingdom.”

How do you feel when you think about Jesus seeing you from the cross?