We’re coming near to the end of the liturgical year, and boy can we feel it.  Paul warns about trumpets sounding and God’s voice resounding through archangels.  And then of course we have this parable of the ten virgins, all anxious for the (late) Bridegroom, but only five are prepared for His coming.  Yes, the end-of-the-world readings are screaming for our attention. 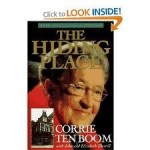 But I want to recall a scene in The Hiding Place, one of the most powerful books written about those who lived and died during the Holocaust.  Corrie ten Boom, her sister and their father had been hiding terrified Jews in a secret upstairs closet in Corrie’s room in Amsterdam.   Corrie, organized and thoughtful, had prepared a bag for herself, with aspirin, a change of clothes, and some small crackers to comfort her when she inevitably fell into the hands of the Nazis and was taken off to the camps.

But the night that the (always punctual) Germans showed up at her house, screaming and pounding and demanding entrance, those who were being hidden leapt into the secret room while Corrie threw her bag in front of the closet.

And when they dragged her away, already feverish with influenza, she left her bag behind.  She couldn’t take the chance that an errant piece of clothing was hanging outside the closet, a clue that would have ended in death for all who had sought safety with her.

And she saved them all. How?  By heroically sacrificing her own preparation for those who could never prepare.  And I’ll bet that, at the moment of her death decades later, the Bridegroom took her straight away into the Wedding Feast.

In what ways have you prepared to meet the Bridegroom?

In loving memory of Sr. Antonia Anthony, OSF, whose happy death on November 4th, surrounded by the Marycrest Franciscans and her family, helped an entire wing at Denver Health sense that the Bridegroom had come for her.

2 Comments to “Thirty-second Sunday in Ordinary Time – Cycle A”