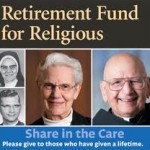 St. Paul’s remarks today about the differences between those who are married and unmarried calls to mind the beautiful death last November of Sr.  Antonia Anthony, OSF.  She was killed by a young driver who ran a red light four blocks from her home.

In her last moments Sr. Antonia prayed Come, Lord Jesus. And he did.

Sister Patty Podhaisky gave this account: Within minutes Sr. Antonia relaxed, and her breathing slowed down until she peacefully breathed her last, surrounded by her Franciscan sisters and her family.  We felt deep communion in the Heart of God with all of you, her/our sisters, families, friends, companions, as we journeyed with her into the heart of Great Love.  It seemed as though Antonia was running home, and the breeze of her passing brushed each of us with tender grace.

I think St. Paul would especially take note of the “deep communion” that the Sisters,  and her  family, all felt with the Body of Christ throughout the world who had known and loved and been loved by Sr. Antonia, whose passion for justice had propelled her to the poorest places on the globe.

Sister Macrina Scott, Sr. Antonia’s great friend who was in the car with her and sustained serious injuries, appeared in court two months later to appeal for mercy for the young man. She and other members of her community gave him a picture of Sr. Antonia, and a prayer card from her funeral.  Instead of prison he will perform five hundred hours of community service.  Sr. Antonia’s spirit remains.

We, all of us, are one Body.  And we do not live or die alone.  Married and unmarried, ordained and vowed Religious, we journey together, praying Come, Lord Jesus. And there he is, in the midst of us.

Have you experienced the friendships of those in vowed religious communities?