Home » Easter - Cycle B » Third Sunday of Easter – Cycle B 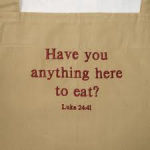 No Comments to “Third Sunday of Easter – Cycle B”