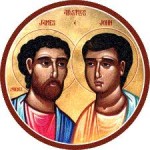 Oh, how tantalizing and frustrating these passages from Mark can be.  If Mark is written in Rome in the late 60s (and tradition says that Peter is the eyewitness behind that earliest gospel), is it possible that word has reached Rome of the martyrdom of James by Herod Agrippa around the year 44 A.D.?  Some scholars think Jesus actually foretold that death when he told the two sons of Zebedee that they would indeed share in the cup of his own suffering (Mark 10:39).

I love to read sections of scripture from Eugene Peterson’s masterful contemporary translation entitled The Message.  Here’s how he relates the story of that martyrdom:

That’s when Herod got it into his head to go after some of the church members.  He murdered James, John’s brother.  When he saw how much it raised his popularity numbers with the Jews he arrested Peter—all this during Passover week, mind you—and had him thrown into jail.  He was planning a public lynching after Passover (Acts 12:1-4).

If only we were given just a little more.  James is the only apostle whose martyrdom is related in scripture.  Tradition tells us of the crucifixion of Peter, and the accounts of the deaths of the other apostles, though not biblical, are precious to the memory of the Church.

But I think that the MOST interesting search is for the martyrdom of John.  Jesus says that both the brothers will drink from that CUP, but what happened to John?  He disappears after the Council of Jerusalem in 50 A.D. (Galatians 2:6-10).  Or does he?

Google “John, the son of Zebedee” and jump into one of scriptures most intriguing mysteries.  Then join the conversation here to chat with Catholics around the country about this fascinating topic.

Have you ever felt closer to Jesus during a time of your own suffering?

2 Comments to “Twenty-Ninth Sunday in Ordinary Time – Cycle B”