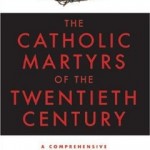 It’s only during the seven weeks of the Easter season that we read from the book of Revelation, certainly the least understood book in the bible.  The book is not a secret code, to be cracked by those up on their conspiracy theories and watchings of the moon, to tell only the spiritual elite when the end of days will occur.

It is, however, a book written to comfort those who lived in Ephesus at the time Emperor Domitian introduced the cult of imperial Rome.  This was enforced participation in sacrifices and festivals that honored Domitian and his ancestors; yes, the very ones who had destroyed Jerusalem and its temple.  The Christians in Ephesus were horrified that they were expected to celebrate the murderers of their grandparents and parents.  Revelation is written to comfort those who would stand up, even to the point of death, to this imperative.

Vatican reporter John Allen has done much to educate us on the greatest era of brutal religious martyrdom, which is our own.  Every year, one hundred and fifty thousand people are martyred as a direct result of their faith, or the works of charity inspired by their faith.  Eighty percent of these martyrs are Christians. There were well over one million Christian martyrs in the twentieth century, and of course the Nazis murdered six million Jews on the pretext that “Christ killers” were not part of the Master Race.

We don’t hear of these martyrdoms much because we hope that we live in more enlightened times, where religion isn’t used as an excuse to take land and lives.  But the blood of the martyrs of El Salvador and Nigeria and Kenya and Turkey and Iraq and Korea says otherwise.  We must not forget them.

No Comments to “Fourth Sunday of Easter – Cycle C”