Home » Easter - Cycle A » Fifth Sunday of Easter – Cycle A 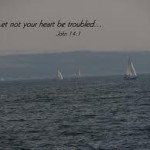 4 Comments to “Fifth Sunday of Easter – Cycle A”